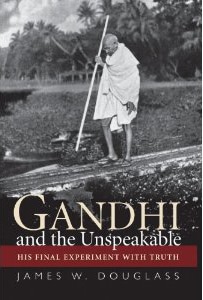 The Gift of Resurrection Life

If I were to describe an unassuming Indian man with wire-rimmed glasses, wearing a white robe, sitting at his spinning wheel, you’d know exactly who I had in mind: Mohandas Gandhi, one of the most celebrated figures of the twentieth century, who remains an international icon of freedom and peace. He inspired the likes of Martin Luther King and countless other nonviolent activists throughout the world. You can even get a mug with a quote attributed to him at Starbucks.

You’re probably not going to find any coffee shop souvenirs with quotes from Vinayak Savarkar, however, and his name likely doesn’t ring any bells. Yet he and Gandhi were contemporaries, both pushing for India’s independence from the British Empire, both trying to win over the hearts and minds of fellow Indians… but through very different means.

Gandhi and the Unspeakable: His Final Experiment With Truth by Catholic scholar and peace activist James W. Douglass is an exploration of Gandhi’s and Savarkar’s competing visions for the future of India, and the question of whose vision ultimately won.

Gandhi’s vision was for a unified, nonviolent, free India. He wanted independence from the British, but only through nonviolent means, with Hindus and Muslims working together to achieve freedom and then living together as free neighbors. Savarkar, meanwhile, was a radical Hindu nationalist who wanted an India free from the British and purged of Muslims, through any means necessary.

“The two men’s developing visions of violence and nonviolence, terrorism and satyagraha (truth-force), assassination and martyrdom, competed then – and compete now with greater urgency – for the future of India and the world,” Douglass writes.

Gandhi may have the international name recognition, and nonviolence may be more attractive to most of us than the violence of nationalism or ethnic conflict, but it does not automatically follow that Gandhi’s vision of the future has won. Indeed, according to Douglass, Savarkar’s ideological offspring – the Rashtriya Swayamsevak Sangh (RSS) party – now constitute one of the largest political movements in the world, second only to the Chinese Communist Party.

Even during Gandhi’s time, convincing Indians to embrace nonviolence as a viable means of achieving independence was a difficult task. In the early days of the independence movement, Gandhi said, “I have practically met no one who believes that India can ever become free without resort to violence.”

Savarkar, whose viewpoint held sway with large numbers of India’s Hindus, advocated defeating one’s enemies by killing them. Gandhi believed that the way to get rid of an enemy is by befriending him, but being willing, if needed, to suffer and die. In a sense, both Savarkar’s and Gandhi’s visions were realized.

Though Nathuram Godse was the man who pulled the trigger of the gun that killed Gandhi in 1948, Douglass shows that Savarkar was clearly working behind the scenes, and had simply appointed Godse to carry out the task. Though India had already gained its independence, Savarkar saw Gandhi as a continued threat to his Hindu nationalist vision.

Douglass examines in detail the peculiar absence of government protection for Gandhi in the final days of his life, when it was known that he was a target for assassination. This despite the fact that Jawaharlal Nehru and Vallabhbhai Patel, the leaders of the Indian government at that time, were by all accounts close friends and allies of Gandhi. Further, while Godse stood trial for Gandhi’s murder, Savarkar – the mastermind behind the assassination – walked free. Douglass suggests that Savarkar’s vision for India had infiltrated the police, the courts, and others in government, accounting both for the lack of protection for Gandhi and the reluctance to link Savarkar to the crime.