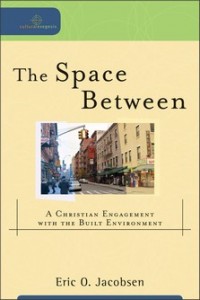 The City of God in our Neighborhoods

The Space Between: A Christian Engagement with the Built Environment

Eugene Peterson paraphrases John 1:14 in this way: “The Word became flesh and blood and moved into the neighborhood.”

This vernacular translation neatly captures the potency of the incarnation as recorded by the Apostle John, while also placing it within an equally latent scale: the neighborhood. In fact, picking up the narrative of incarnation and reconciliation with Jacques Ellul, the neighborhood takes on its full significance:

But because Christ is Savior and Lord of both creation and mankind, he is also Savior and Lord of man’s works. In him, God adopts man and his works… He has chosen to dwell in it. And just as the man living in the city is directly subject to the spirit of the city, now those who dwell in it are in communion with God, for he has truly assumed it… and has transfigured it. For even in the resurrection, God does not shatter men’s hopes. Rather, he fulfills them there… And all this happens in the New Jerusalem, so as to forever link man’s work with Christ’s… Man’s version of the incarnation finds an eternal home. (The Meaning of the City, 177)

Likewise, in the narrative of the New Jerusalem, described especially in Revelation 21 and 22, we find “the holy city, new Jerusalem, coming down out of heaven from God, prepared as a bride adorned for her husband.” In it are “the river of the water of life, bright as crystal, flowing from the throne of God and of the Lamb through the middle of the street of the city; also, on either side of the river, the tree of life with its twelve kinds of fruit, yielding its fruit each month. The leaves of the tree were for the healing of the nations.” The city (read: neighborhood) of God becomes the central image of God’s reconciliation of all things; and for our current day, the neighborhood is perhaps one of the best scales at which to think about how reconciliation gets work out on earth as in heaven. At the scale of the neighborhood, we can know by the senses of our bodies; we can meet our neighbors and strangers in common, shared spaces; and we can enter into and work towards the long work of God’s transformation in our places.

Eric Jacobsen’s newest book The Space Between: A Christian Engagement with the Built Environment takes up many of these themes through the embedded life of local congregations, the reforming work of New Urbanists, and reflection on the scriptural narrative from the created order to the New Jerusalem. For the first half of the book, Jacobsen relies heavily on well-regarded urbanist thinkers – Jane Jacobs, Jan Gehl, Leon Krier, Philip Bess – and so, for those who have read the work of these urban thinkers, this section tends towards review, however, if these are unfamiliar names, The Space Between provides a comprehensive survey of neighborhood thinking over the last 60 years; specifically, for local churches, this is one of the few places where all of these writers are brought together with the aim of encouraging congregations to enter into the life of their places, and as such is invaluable. Regardless of your current geography, Jacobsen asks that we take seriously the scale at which we can experience the shared life of the kingdom of God:

To talk about community as a physical place or a setting for real human relationships, as the New Urbanists have taught us to do, is revolutionary.

Over the course of the book, Jacobsen describes the short course of development in the United States: traditional urbanism and post WWII development; human scale and perception; street definition and grids or blocks. He then describes the different communities of which we may be a part, and how those function for the common good, or our shared life together, as well as how our structures (houses, churches, streets) reinforce or negate the choreography of human interaction. Throughout the book and particularly at the end, Jacobsen describes seeking shalom and Sabbath as a means of restoring human flourishing in the context of a reconciling community.

Channeling Jeremiah, Jacobsen writes, “the criterion that is to give shape to their intentionality is described by Jeremiah as welfare, or shalom… we see a bit more clearly here that it is a communal value” (133). And in seeking this shalom, we turn neither to nostalgia (a return to the garden), or revolution (a writing off of all that has come before us), but rather we go the way of redemption, by which, as Ellul suggests, our human culture – like all of creation – is made new by God.

Jacobsen heads this way with The Space Between, suggesting ways by which it is through our shared affection and love over an extended period of time in a place that we will come to see its redemption, though to finish back with Ellul: “[the city of God] is the place where we shall know by love” (Meaning of the City, 207).

The Space Between, while not as succinct as Jacobsen’s excellent essays (see http://www.civitate.org/2011/09/redeeming-civic-life-in-the-commons/ – more-263 for instance), does provide a necessary sustained look at how the very structure of our developments – be it our houses, church buildings, neighborhoods, suburbs – all work in a direction that may or may not encourage the sort of flourishing and reconciliation that we believe to be the work of the church. And, unfortunately, how we physically structure our living and working has often been an oversight; thus, Eric Jacobsen is an important writer to pay attention to. To this end, what if our churches embraced their particular places as the scale at which to share lives together in ways that point to the radical in-breaking of the kingdom of God in our very neighborhoods? The kingdom of God? On our block?

Brent Aldrich is Art Editor of The Englewood Review of Books.  He is also a member of Englewood Christian Church and teaches at Herron School of Art in Indianapolis.

Why Evangelicals Should Read B ... →