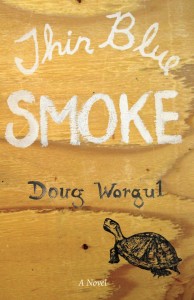 A grill-master, one who sniffs at the mention of propane fuel and mock store-bought sauce, will tell you that good barbecue cannot be rushed. The mean cut must be seared, then slow-cooked over low heat for many hours. Heat breaks muscle fibers at a leisurely pace until the final product is fall-off-the bone tender. Doug Worgul’s novel, Thin Blue Smoke, conforms to the pace of barbecue and the result is just as satisfying. This is a triumphant exercise in character development. Thin Blue Smoke is a patient book, but by no means does it plod or bore; the characters that Worgul crafts here find redemption despite their numerous and significant flaws. They aren’t changed instantly in the revival tent of a traveling evangelist. Instead, God deals with each friend slowly, with the patience and devotion of a barbecue veteran, and tenderizes them with time and adversity—the smoldering coals of life.

Oscar Wilde wrote that every sinner has a future and every saint has a past. The characters in Thin Blue Smoke testify to his correctness. LaVerne Williams is a former baseball player and a former felon, and by the time the novel opens he’s an upstanding pillar of the community and the proprietor of a barbecue joint known as “Smoke Meat.” He’s gruff and no-nonsense, at a place in life where he values simplicity and order. Early in the novel, we’re told that he understands God and whiskey more than his improbable friend, Ferguson Glen. LaVerne is black and has grown up on the short end of Jim Crow laws. Ferguson is white, an Episcopal priest, a diminishing literary force, and an alcoholic. Ferguson’s love/hate relationship with God and bourbon has shipwrecked his writing career and his tragically brief marriage. Each friend is simultaneously noble and tragically flawed, making them patriarchs in the full Biblical sense, ones with just a touch of sauce in caught in their whiskers.

Blues and barbecue fit tongue and groove at the Smoke Meat. Mother Mary Weaver’s blues music weaves in and out of the storyline, but “the blues lifestyle” is omnipresent in Thin Blue Smoke. This blues mindset has one eye on earthly comfort and a second on heavenly relief from this world of suffering. Williams and Ferguson are each soul-weary from the slow heat of life’s crucible; a fire hot enough to torment them but not fierce enough to bring them to their final rest. They cope by employing a gallows humor that acknowledges the injustices of life and then tags it with a wistful and playful punch line. The result is a frequently humorous dialogue.  The reader finds himself empathetically shaking his head and smiling in spite of himself. There is shared knowledge: “Yes, this is what life is like.” Worgul uses this sensibility as he patiently adds more coals to their slow-cooking hells and exposes then to ironic injures along the way. Their sardonic and worldly-wise dialogue keeps the novel from dragging.

The forty-one seat LaVerne William’s Genuine BBQ and City Grocery, commonly known as “Smoke Meat” is as much of a character as it is a setting. Smoke Meat embodies LaVerne’s unpretentious hospitality, his stubbornness, and his fierce loyalty to family and friends. LaVerne intentionally leaves the tag line “Smoke Meat” uncorrected on the brick face of his shop in memory of his fallen son. The menu, devoid of fries and molasses-drenched beans, reveals LaVerne’s traditionalism, as does the fact LaVerne is uninterested in keeping up with times and expanding his establishment. Smoke Meat is a protest against time’s march and a defiant attempt to hold onto simpler days, a protest that ultimately draws LaVerne into renewed conflict. Worgul’s descriptions empower to the reader to smell the rubbed pork waft in from the back room and see each and sauce stain on the floor. Smoke Meat becomes the readers’ third place and we imagine ourselves being regulars watching the story unfold from our booth.

The pacing, superb writing, and character studies that sprawl over decades of Thin Blue Smoke place it firmly in the genre of American epic. This reviewer found himself fondly recalling East of Eden during the first few chapters. Readers demanding a taut conflict and a page-turning plot will be frustrated. Even the secondary characters, such as A.B. Clayton are exquisitely built to the point readers may mistake them as being primary, and even wish they were. Over time, it becomes evident this story belongs to Laverne and Ferguson. Even so, I was left with the suspicion Worgul knew the history, futures, and dreams of each and every one of his characters.

It is no easy task to explore spiritual themes in fiction well. If it were, more authors would do it. Too often when an author touches a character with the hand of God, the character falls like a soufflé, flattening into a two-dimensional flannel-graph figure, suitable to be used in a moralizing tale.  Worgul resists this impulse. He understands the human spirit resists God’s touch as strongly as it yearns for it. He knows the only way for God to change a stone-tough and gnarled human heart is with merciful low heat. The human heart was not built to withstand epiphany and not be consumed. Redemption is slow and steady work, like barbecue, the unfolding of a blues song, and like the turtles whose presence reoccurs throughout the book. Barbecue, then, is not only setting but metaphor. In the forward, the thin blue smoke of barbecue is likened to the incense smoke of the Jerusalem Temple. In Israel’s liturgy, this smoke represented the prayers of the oft-suffering nation. The thin blue smoke rising from the smoker becomes the prayers of the living sacrifices languishing on life’s coals. The art of barbecue was born in the Antebellum South. Slave owners enjoyed the best cuts of meat for themselves while providing their slaves the worst and toughest cuts. Barbecue is the art of reclaiming the undesirable and transforming it into something coveted. Worgul trusts the readers enough to trust them to touch the toughness of his characters’ souls and to feel the pain of life’s heat. He knows that without providing these elements the reader will not trust the reality of a life transformed by Divine Love.

Thin Blue Smoke is a powerful novel worthy to be shelved alongside Buechner and Flannery O’ Connor. Doug Worgul’s first work is a triumph. We can only hope that he is currently sitting at a corner booth, in some greasy, independently-owned BBQ  joint wiping sauce off his fingers so he can bring more brooding, yet winsome characters to life.

Larry Shallenberger is the author of Divine Intention: How God’s Work in the Early Church Empowers Us Today (David C. Cook) and a pastor in Erie, PA. You can find more of his writing at www.larryshallenberger.com.