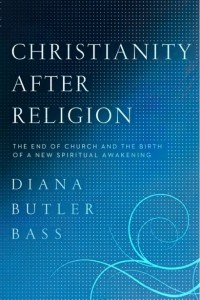 The End or the Beginning?

Christianity After Religion: The End of Church and the Birth of a New Spiritual Awakening
Diana Butler Bass.

As the age of “spiritual but not religious” just now hits its stride in American society, commentators and pundits fill the airwaves, the Internet and a host of books in order tells what it all means – most with a great deal more diffuse heat than helpful illumination.  Atheists and secularists trumpet religion’s demise as the less strident among them call for toleration of quaint tribal superstitions and the outright banishment of more troublesome expressions of religious practice.  Fundamentalists lament the rise of godless humanism, the pagan-like new age spiritualities and militant Islam as they themselves struggle to impose a gauzy “godly” bygone morality from the early 1950s.  Mainline denominations retrench themselves.  Church growth and mega-church devotees trot out new marketing schemes.  Many observant and not so observant Christian parents feel perplexed as their children leave the faith and never seem to come back to it.  Emergent Christians call for a new less sectarian, more world-engaging form of Christian practice.   Our time is one of change that seems to many to be one of fundamental transformation.  That change disorients many and we look for guides to this new age.  In Diana Butler Bass’ Christianity After Religion many readers will find an accessible, learned and hopeful guide to where our “brave new world” is taking us.

Bass opens this learned, engagingly written book with a selection from one of Dietrich Bonhoeffer’s “religionless Christianity” passages from his posthumous Letters and Papers from Prison.  As the martyred German pastor detected a time when people “simply cannot be religious anymore” (9), one may wonder after reading Bass’ analysis of the end of religion” whether Bonhoeffer’s analysis of life in West was just a few decades early.  Was Bonhoeffer right?  Yet as the reader progresses through Bass’ argument, a more hopeful assessment presents itself.  With a substantial debt to Harvey Cox’s often prescient global analysis in The Future of Faith, Bass sees our age as an in between time of transformation when something old (traditional dogmatic religion) is dying and something new is being midwifed into existence in a new awakening.  In intuiting this nascent awakening, Bass relies heavily on parallels drawn from historian William McLoughlin’s classic Revivals, Awakenings and Reform.

Is this shades of Cane Ridge and Jonathan Edwards in a new agey, hip setting?  While Bonhoeffer addressed the West and Cox’s view was more global, in essence Bass contends for a more practical and American application of Cox’s “age of the Spirit” based on a foundation of periodic good old fashioned revivalism from McLoughlin, now called an “awakening”.